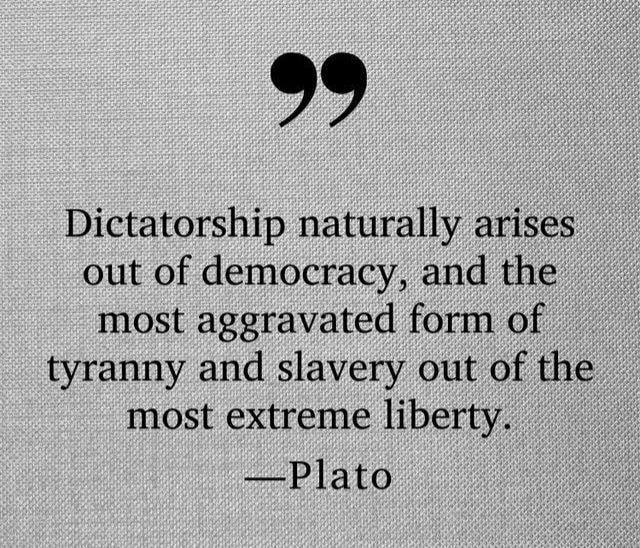 WHY THERE IS NO POLITICAL SOLUTION FOR NZ!

15 September 2022
“Just vote them out next time” how many times have you heard this? The lovers of democracy seem to think it’s the solution to all our ills, but they aren’t so quick to see it’s actually the fount of much of our societal madness. We’ve been raised on decades of propaganda associating freedom with democracy, quite literally in the words of George Bush Junior and his fellow war criminal Tony Blair. It seems few, even in the freedom movement heed the warnings of democratic systems from America’s founding fathers. They knew what democracies naturally descended into- the mob rule and despotism which caused so many to flea Europe and prosper in the United States.

An “appeal to popularity” is a well known logical fallacy, yet that is exactly the premise of democracy. Why would we expect logical, rational outcomes when we build our society upon popularity contests? Contests where those with the most advertising revenue, media and crony-corporate connections almost invariably win.

In many cases our democracies aren’t even democratic, because there is little to stop politicians from making decrees, just as they did during covid, with no due process and no concern for individual liberties.
We have ended up with the worst of dictatorship and democracy combined; soft, effeminate “kind” leaders who fool the mass of naive people, in order to control, manipulate and forcefully coerce if you happen to be in a dissenting group, just as if they were a Stalin or Mao. “Democracy” has just put a pretty face on high tech dictatorships where the “will of the people” is largely artificially manufactured by the state.
Strangely these popularity contests end up reflecting minority and special interest groups disproportionately. For example the LGBT ideology taught in schools and Orwellian newspeak in the form of pronouns are cases where the government exploits a tiny few out of “concern for their safety” as a pretext to socially engineer the majority.
Democracy also supercharges inequality by way of governments taxing the working class and handing billions to corporations from Downer to Pfizer, in secret deals often with little to no competition or consultation. Hardly egalitarian, yet Labour, National alike engage in it.
Even when freedom minded individuals try to run in democratic elections in an attempt to represent the discontent amongst us, we see deliberate attempts to sabotage them.
Stuff recently naming, shaming and profiling dozens of loosely affiliated anti-mandate candidates running for local councils around the country is one such example. It is proof of what we have long known, that we are allowed to vote for candidates who represent a narrow band of “acceptable” views. If anyone speaks outside of the Overton window they are dismissed and derided as “crazy conspiracy theorists” before they are even heard out.
A good example of one such topic which is off limits to democracy is water fluoridation. Despite the practice being banned in Europe as it constitutes forced medication and an uncontrolled dose. Despite over 60 studies showing it absolutely does lower IQ in doses around 1ppm which is administered across this country, it still cannot be entertained. People are ridiculed for believing in it, without the mainstream media ever actually confronting the scientific studies or ethical arguments.
If we cannot solve relatively simple, small issues, how are we going to use this evermore broken and corrupt system of democracy to solve the mess recent years? The obvious answer is we cannot. Not a single voice stood up for us in parliament when the going got tough and we needed them most. They were silenced by Jacinda, the media and in the case of the ACT party- even their own “libertarian” leader David Seymour threatened his cabinet to not even meet protesters!
I’m sorry to disappoint you, I’m not being cynical here, it’s simply a case of being realistic. Voting doesn’t change much if anything, National won’t repeal the insanity and remove gender theory from schools, ACT won’t repeal the coming hate speech laws. They aren’t conservative or libertarian respectively, just as the Greens aren’t actually environmentalists with their pushing of 1080 and fluoride.
The solution lies in ourselves, not contracting out our responsibilities to piss weak politicians. For each of us to prioritise physical and mental health and engage in a peaceful war of information, is the only solution I can see. Only then will the Overton window open and the minds of our peers able to even entertain our objections for more than thirty seconds. If they are too far gone, too conditioned by our officials and media to ever listen to our points of view and seek to further marginalise, criminalise and silence our voices…a different kind of war will need to be fought.
However know that the solution is not in mass media, mob rule, popularity contests, cults of personality and special interest groups. We need actual binding, concrete civil rights that can never be suspended on a whim again and that cannot happen in this Westminster system of government.
– WR
“OPEN DEBATE AND CONVERSATION IS THE ONLY WAY TO AVOID VIOLENCE!” Here:
https://counterspinmedia.com/…/open-debate-and…/