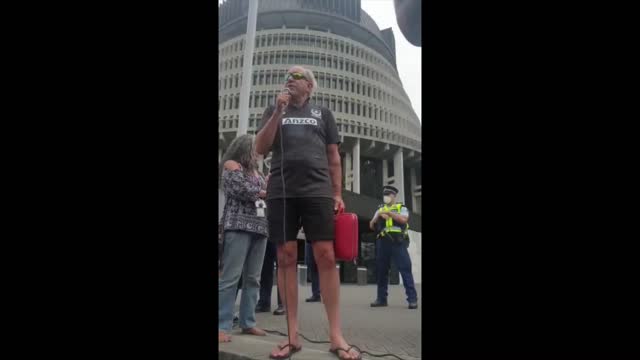 Brett Power has vowed on doing a citizen’s arrest on Health Minister Andrew Little, but today he was temporarily stopped and instead, arrested by police.

Back in December 2021, Brett Power from Stratford, initially filed documents in the High Court.

Then last week Brett he was accompanied by over 200 people, when serving documents and evidence to the New Zealand Police in New Plymouth.
The evidence included referral to the coroner’s report into the death of Rory Nairn and other sources including the NZ Government and Pfizer’s own documents.
Documents served contained Manslaughter Charges against Health Minister Andrew Little.
The police have they have formally opened a case, file number 220203/2237 but have failed to arrest Little, by acting accordingly under the law.

Today Brett continued with the third step in the lawful process, to serve documents with evidence that demonstrate Little is guilty of culpable murder.
Acting within the law under the crimes act, Brett wanted to take documents into parliament & effect a citizens arrest, but the NZ police prevented this due process by obstructing him from doing so.

Many now believe these particular police have undoubtedly shown who they serve now.

And it’s not only CSM who are being discouraged from showing the truth of what’s happening by people alleging to be on the side of the people.

If you have loved ones or know of friends who have died as a result of the Pfizer injections pushed obsessively by the New Zealand government under Health Minister Andrew Little you can add your evidence to Brett’s legal case file number 220203/2237 with the NZ police.