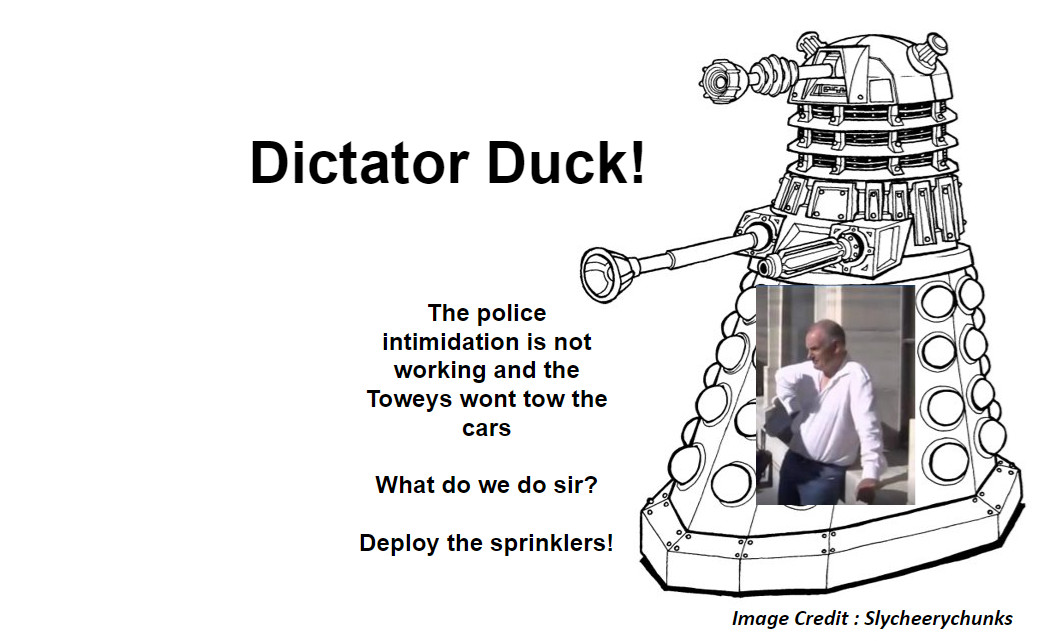 Today the speaker of the house….
watched in glee as the families below including women and children were sprayed upon.
He had directed the groundsman of parliament to turn on the sprinklers.

This did not dampen the spirits of the FREEEDOM loving people on the grounds of their parliament.
They quickly improvised using numerous traffic cones from the streets nearby, to cover the sprinklers and the use of sculptured plastic water bottles into works of art for the ongoing entertainment of the residents of the camp!

The residents on the lawn would like to say Thank You for some free fun that they were not expecting!
Maybe after wasting $500,000 of New Zealnd tax payers money for a children’s slide, he could spring for a few bouncy castles out of his own pocket for the front lawn too?

In his childish tyrade Dictator Duck unknowingly set himself up in violation of the current water restrictions by the Wellington City Council.
A formal complaint drawing the Councils attention to the Duck violation has been filed with the Council.

He just made a Duck er Dick of himself yet again just like the deformation debacle that aunty cindy had to save the lame duck from some time back.

Update 1: 10:15 am Saturday 12th February 2022.
Demonstration of low iQ continues with arrogance and stupidity.
The sprinklers have been running all night now wasting a huge amount of water during a water shortage.
During a Live call made to the Wellington City Council, Counterspin Media was informed that the current water restrictions only apply to the residents of Wellington who pay for the water and not the self important hiding in the wasphive who do not.

Message to Dictator Duck …. it’s not working mate.
You will not dampen the spirit to FREEDOM loving New Zealanders with a bit of water!
The world can see your childish desperation!

Update 2: 10:30 am Saturday 12th February 2022.
The sprinklers have been turned off.
Maybe the wasphive was fast approaching it’s water limit and was worried that the dunnys wouldn’t flush soon?
The dunny use will be an important issue to those inside at the current time.
Will there be a restriction on bathroom tissue soon in Wellington?

We will update this post with any further developments on this story.