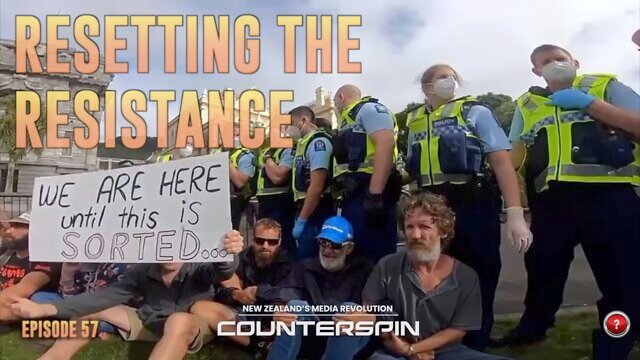 On tonight’s show we aim to reset the resistance after the sad ending to the recent Wellington freedom protest.

We note the continued attacks against Counterspin in the MSM, we comment on the $22 million given to Maori health, the “blessing” of Parliament grounds after the “river of filth” left, “where is Clarke Gayford” makes the mainstream & retirees get shafted in MIQ, plus NZ Hollywood elite back the Prime Minister while bragging about their fame & fortune.

We are joined by long time truther & filmmaker Vinny Eastwood, who explains his now infamous Spartan speech before his arrest in August 2021.

Vinny offers some insights into resetting one’s self and the movement, when one has had personal hurdles or feels defeated.

Rob Wilson, former AAG leader and current New Nation Party South Island coordinator, joins us to comment on the recent controversy he was embroiled in at the Wellington protests’ final day of police brutality.

Rob then offers solutions to money issues, after commenting on a Catherine Austin Fitts video discussing digital ID’s and the link to currency controlling the freedoms of humanity.

We wrap up with a Kelvyn rant explaining how one can create a new nation and go out on some comedy.